Members of the NHS, emergency services and volunteer organisations go above and beyond in service of our society, sometimes even risking their lives in times of crisis.

The Police, Fire and Ambulance services attend millions of incidents each year, supported by others who give their time freely to keep our country’s communities safe.

The efforts of these individuals and organisations have been key throughout the Covid-19 pandemic, with people in the NHS, emergency services and Armed Forces working tirelessly to support our Nation.

Join us as we explore the vital roles that these everyday heroes play, and learn about the ways in which their dedication and bravery protects us from danger.

Before the NHS, healthcare was provided by a patchwork of public, private and charitable schemes, leaving many working class families unable to access even the most basic care.

The Government-commissioned Beveridge Report, published in 1942, highlighted the extent of poverty and the awful conditions in which many families were being forced to live. This damning insight into poverty and its effects on the health of the Nation emphasised the need to provide returning soldiers, sailors and airmen and their families with a robust social welfare system.

The National Health Service was launched on 5 July 1948, one of a series of sweeping social reforms introduced by Clement Attlee’s Labour Government after the Second World War. The creation of the NHS brought healthcare providers together into a single organisation so that everyone could benefit from free healthcare from the ‘cradle to the grave’.

Today, the NHS has grown to become one of the biggest health institutions in the world and its services are accessed by around one million people every day. 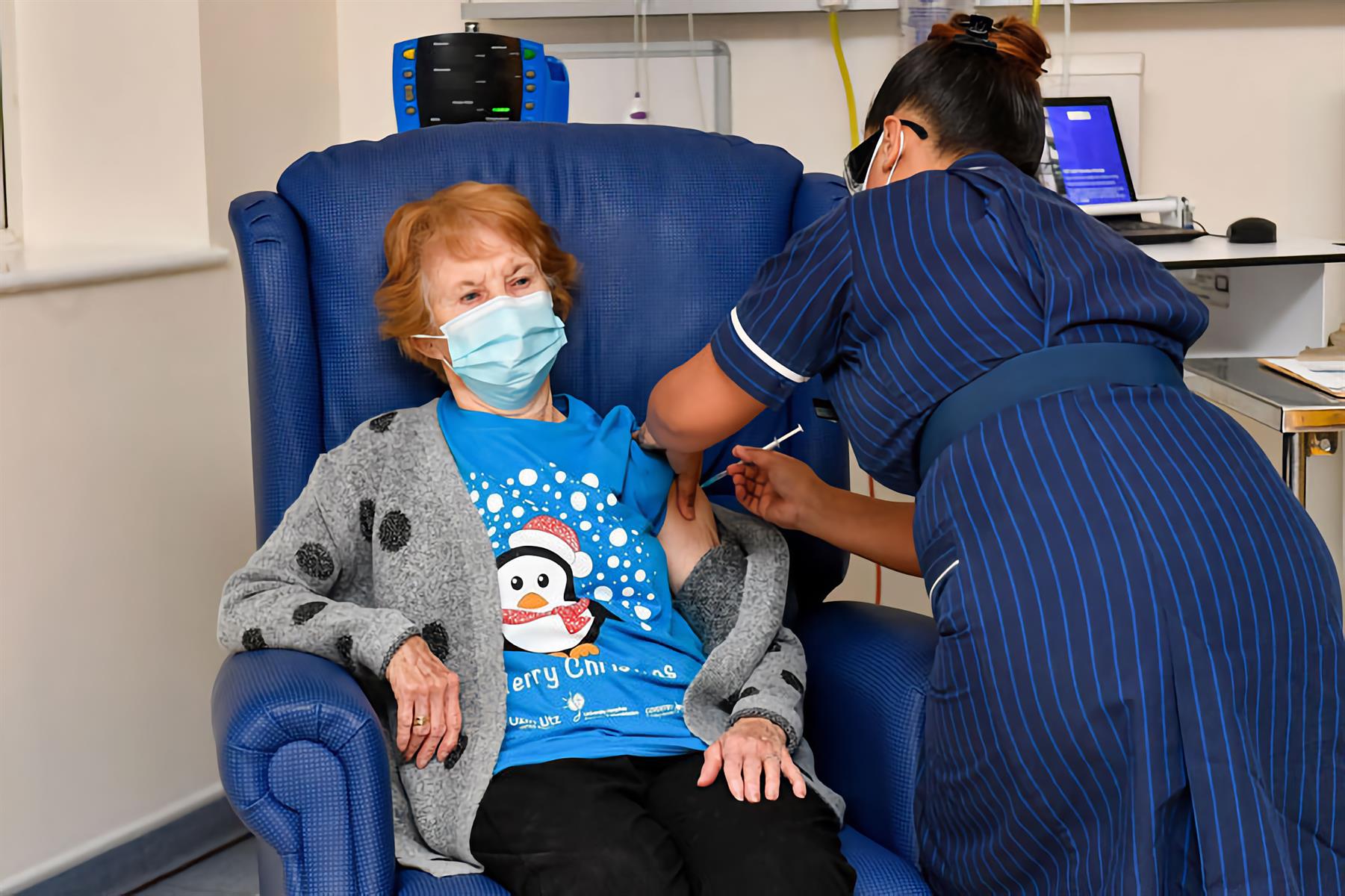 90-year-old Margaret Keenan becomes the first person in the world to be vaccinated against Covid-19 outside of clinical trials, receiving her jab at University Hospital, Coventry. ©REUTERS / Alamy Stock Photo

The Covid-19 pandemic is the biggest challenge the NHS has faced in its 70-year history, stretching the service to its very limit.

As of June 2021 nearly half a million people have been admitted to hospital, and at the peak of the second wave in January 2021 more than 4,500 people were hospitalised in a single day. The pressure on the service was so intense that retired doctors and nurses were asked to return, providing support to the dedicated teams working all hours to care for the critically ill.

In July 2021 the Queen awarded the NHS with the George Cross, marking their bravery and dedication throughout the pandemic. The George Cross, first instituted during the Second World War, is only given for "acts of the greatest heroism or of the most courage in circumstances of extreme danger".

The world’s first Covid-19 mass vaccination programme has only been possible thanks to the commitment of a vast network of NHS staff and volunteers.

In the early nineteenth century policing in Britain was arranged locally, and often limited to patrols by paid watchmen and constables.

The closest thing to an organised police force were groups like the Bow Street Runners, who wore plain clothes and operated in London from around 1750, seeking help from the public to catch the capital’s ever-growing number of criminals.

Sir Robert Peel was responsible for the creation of England’s first professional force, and the first officers, dressed in blue tail-coat uniforms and top hats, started patrolling the streets of London in September 1829. Issued with wooden truncheons, handcuffs and a rattle, the Metropolitan Police Force, first known as Peelers and later as Bobbies, would become a model for the creation of future forces.

Today, there are 48 police forces in Britain, with more than 200,000 officers serving their communities. 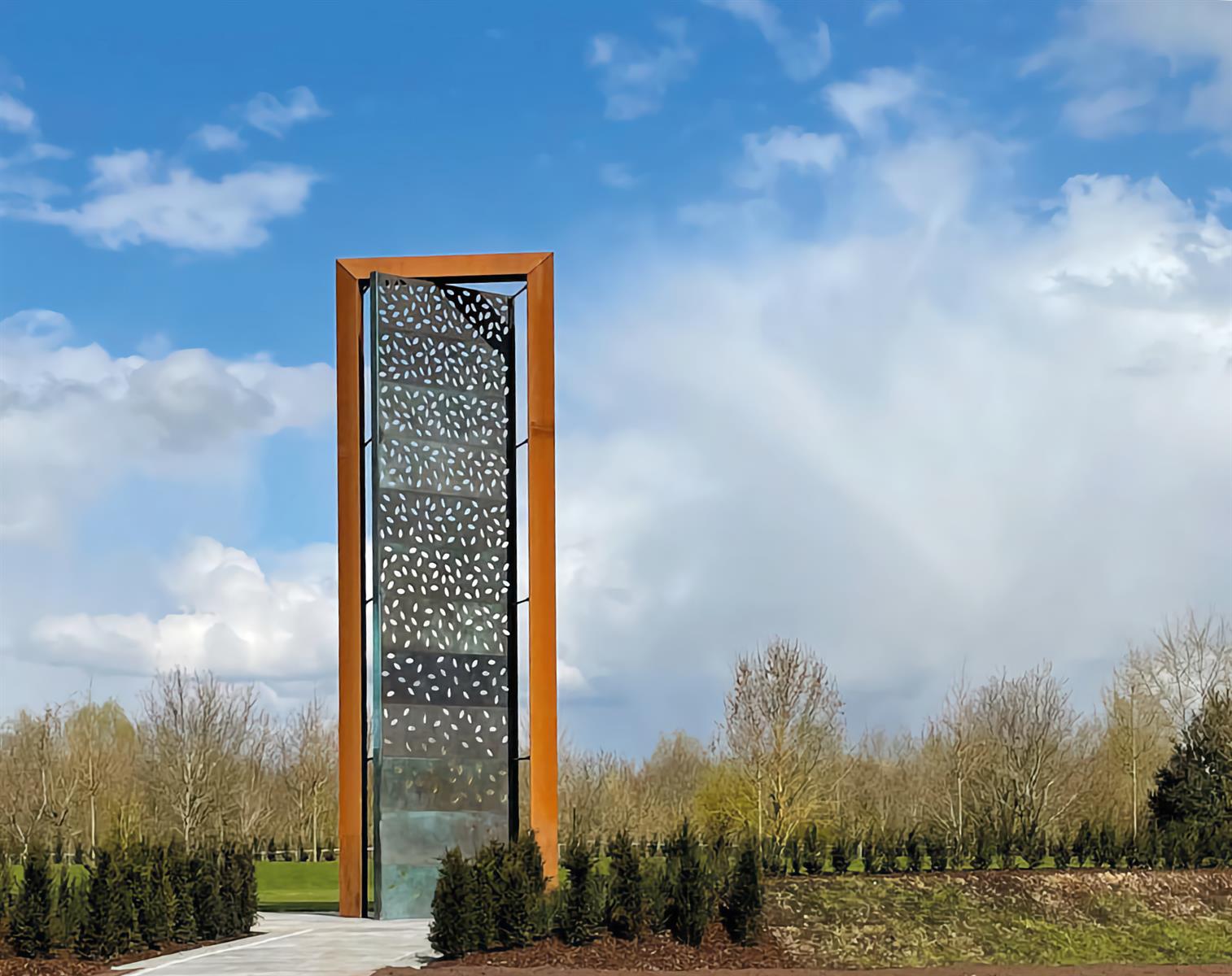 The UK Police Memorial stands at the National Memorial Arboretum as a tribute to all the officers lost. The towering doorway of the memorial represents the threshold between safety and the dangerous places where police go.

In the Face of Danger

Police officers serve bravely in the face of daily dangers presented by their work. In 2020 there were more than 30,000 assaults on officers in England and Wales. Dating back to the first patrols, more than 4,000 men and women have made the ultimate sacrifice serving their communities, with the earliest record of death on duty being made in 1547.

The UK Police Memorial, located at the Arboretum, remembers the officers who lost their lives while valiantly protecting their communities.

Organised firefighting in Britain can be traced back as far as the Roman invasion in 43AD, but for centuries firefighters were little more than willing volunteers with buckets of water.

When the Great Fire of London destroyed large parts of the capital in 1666, firefighting was taken more seriously, and insurance companies began to employ teams of watermen as firefighters. The watermen would protect buildings belonging to policy holders which were identified by plaques attached to them to show that they were insured.

The world’s first municipal fire brigade was launched in Edinburgh in 1824 by James Braidwood, who is widely considered to be the father of the modern fire service, as well as being responsible for the creation of the London Fire Engine Establishment in 1833.

A National Fire Service was formed during the Second World War and members regularly risked their lives to fight blazes during dangerous bombing raids. Soon after, the Fire Services Act of 1947 made firefighting functions the responsibility of councils.

Today, there are 53 fire services in Britain and 32,000 firefighters courageously rescue people from a wide range of emergency situations every day.

Above: Firefighters fighting a chemical fire, 2020. 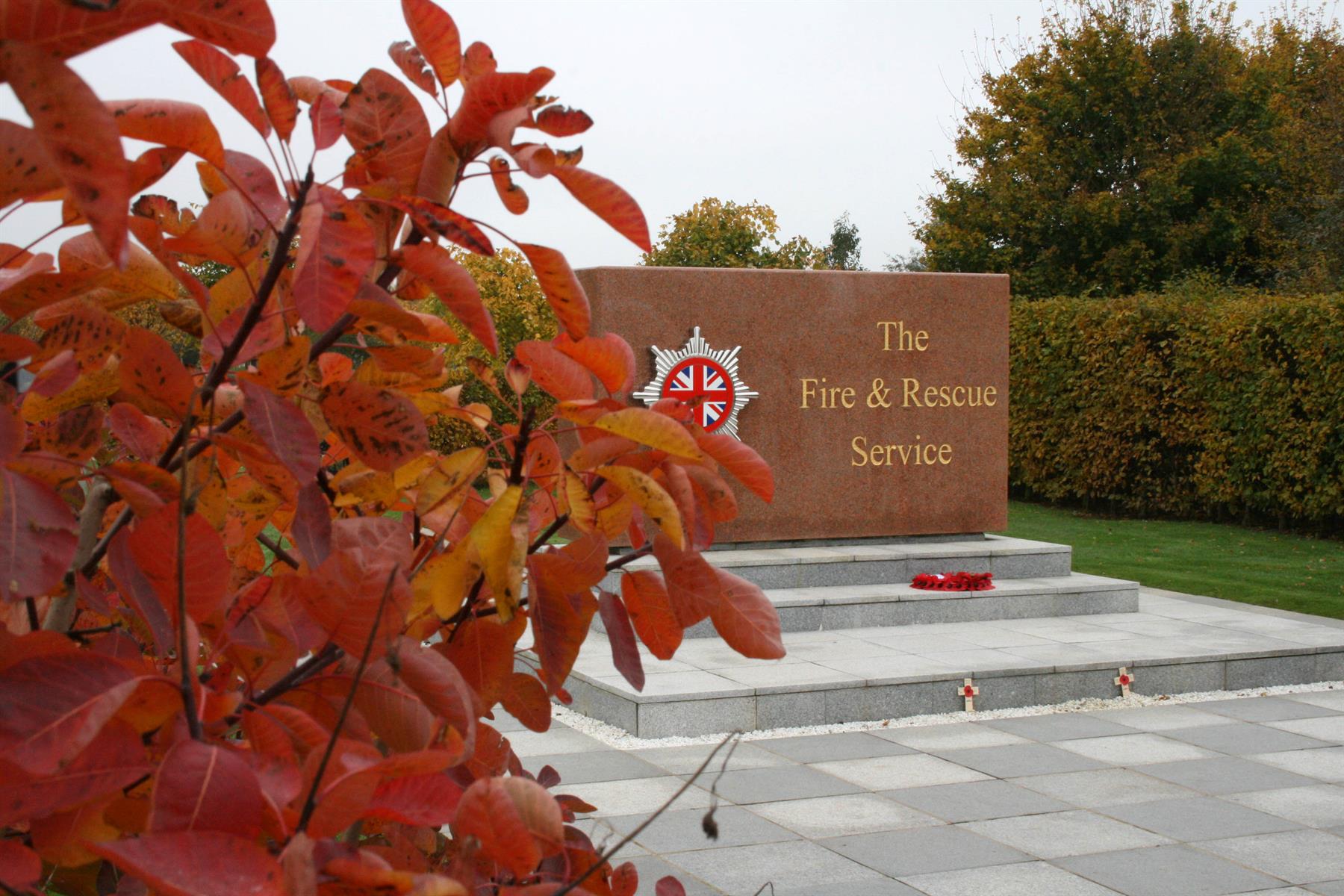 The eight points of the star on this memorial represent the qualities required of all firefighters: tact, gallantry, dexterity, observation, perseverance, loyalty, explicitness and sympathy.

Firefighters are often the first at the scene of emergencies and only half of the incidents they attend are fires.

While early firefighters had little more than a leather bucket, today’s lifesavers are supplied with state-of-the-art equipment, including high-pressure pumps, aerial appliances, drones and cutters.

On 7 July 2005 four coordinated terrorist bombs were detonated in London. Despite the ongoing danger, firefighters sprang into action to rescue as many people as possible. The fire services are now even better prepared for similar incidents in the future, with dedicated communication networks and higher levels of first aid training.

The Firefighters Memorial Garden at the Arboretum is dedicated to all those who have bravely served and continue to serve with our fire and rescue services.

The connection between the Armed Forces and the Emergency Services has a long history, rooted in a mutual desire to serve and protect the British public from harm.

Throughout the First and Second World War, the military, police, medical and fire services worked hand in hand to keep the Nation safe. The Emergency Medical Service was set up to treat civilian and military casualties, and the Auxiliary Fire Service fought blazes during the blitz. In addition to their usual duties, the police worked with air raid wardens and the Home Guard, handling reports of bombs and enforcing the wartime blackout.

Today, many Armed Forces personnel transition into emergency service careers when they leave the military. Both professions require similar skills, such as working well under pressure, discipline, physical fitness and the ability to improvise in difficult circumstances. Some UK Ambulance Services even offer guaranteed interview schemes to people who have served in the forces, recognising the valuable relevant experience gained through their Navy, Army and RAF roles.

The Armed Forces have been vital in supporting the work of the emergency services throughout the pandemic. In the biggest ever homeland military operation during peacetime, more than 5000 military personnel have assisted with the Covid-19 testing and vaccination programmes, delivering vaccines by land and air as well as helping to plan the rollout.

Above: Members of the Armed Forces in PPE on duty at a Covid-19 testing centre.

Volunteers are an essential part of the emergency services family, giving their time to help safeguard the physical and mental wellbeing of the population.

Voluntary workers have continued to provide important services to the public over the past year, from administering vaccines to delivering food and essentials to people shielding from Covid-19.

You can explore some of our memorials to volunteer organisations and the vital work that they do below.

Above: RNLI Volunteers in a D-class lifeboat, first introduced into the RNLI fleet in 1963. 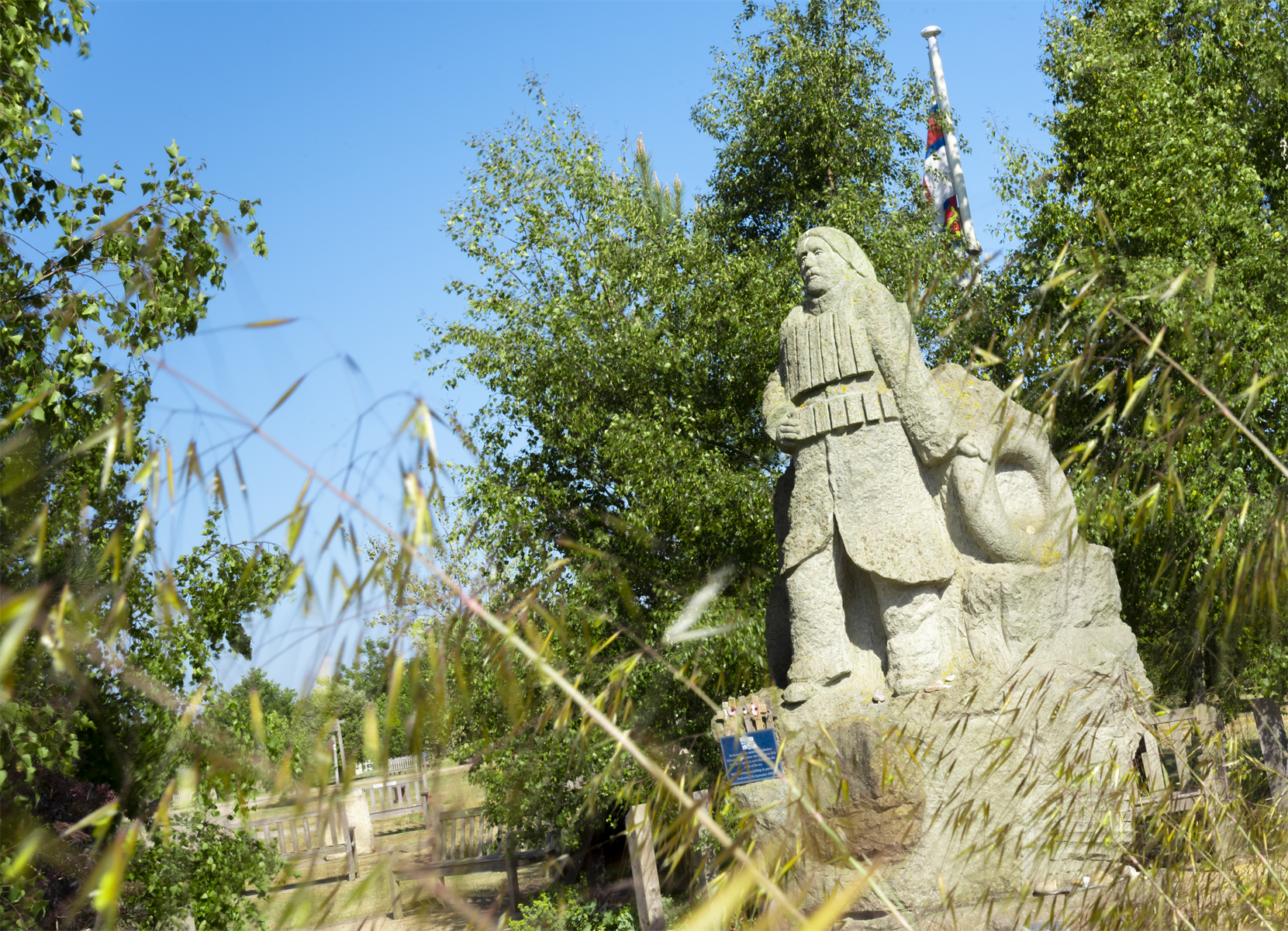 The Royal National Lifeboat Institution has been saving lives at sea for nearly 200 years, with 95% of the organisation being made up of volunteers. Independent from the coastguard, the RNLI’s 24/7 search and rescue lifeboat service has even continued throughout the Covid-19 pandemic. Their volunteer lifeboat crews and lifeguards help thousands of people each year, having saved over 143,000 lives since the charity’s foundation in 1824. 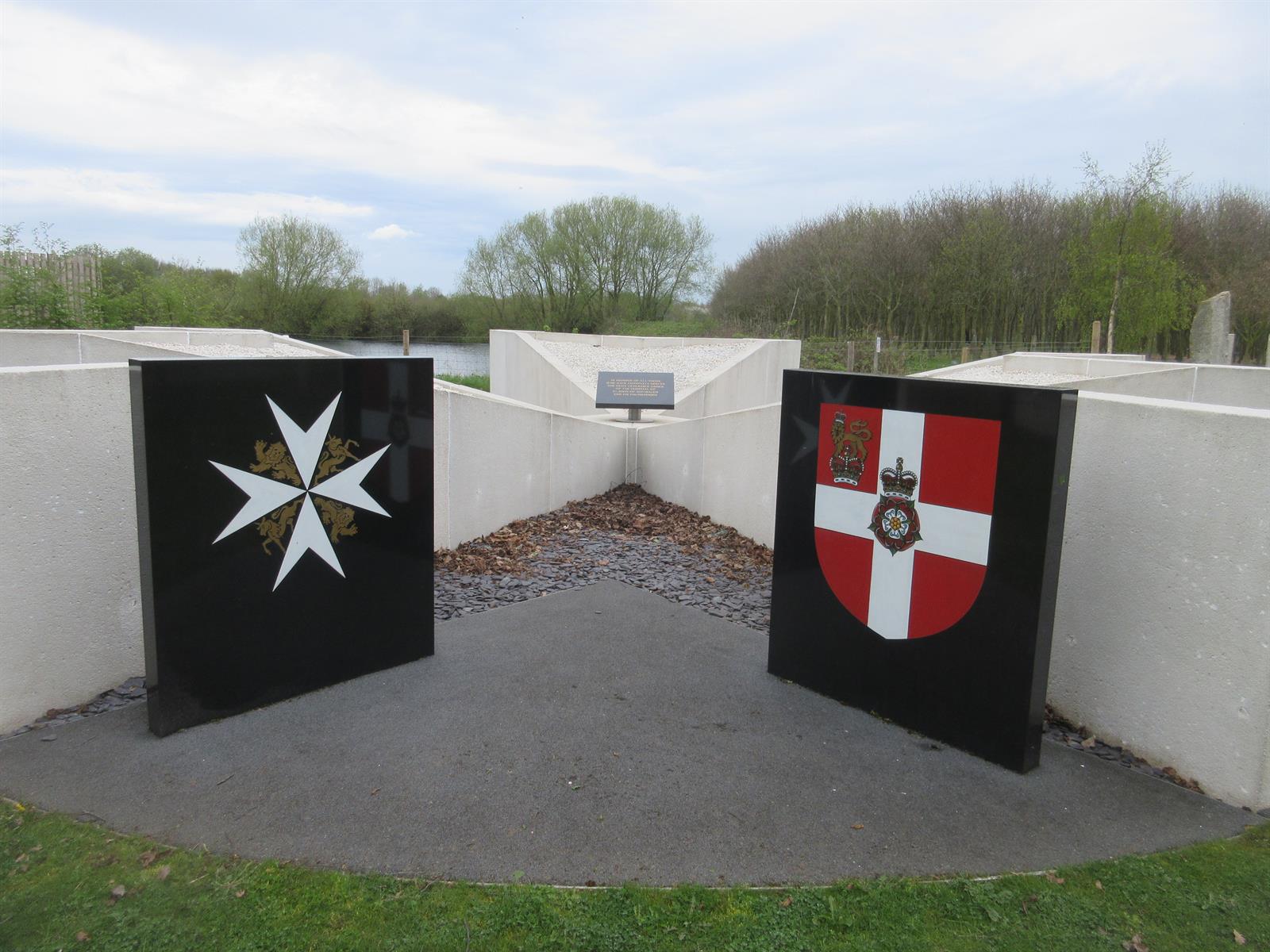 Through the work of their volunteers St John Ambulance provides first aid at events all year round, as well as supporting the emergency medical workers of the NHS. Some 400,000 people learn first aid through the charity’s training programmes each year, aiming to ensure that people have the skills to help whenever a first aid emergency occurs in the home, workplace or elsewhere. St John volunteers have also helped with the vaccination programme during the pandemic, administering the vaccine and supporting people through the process. 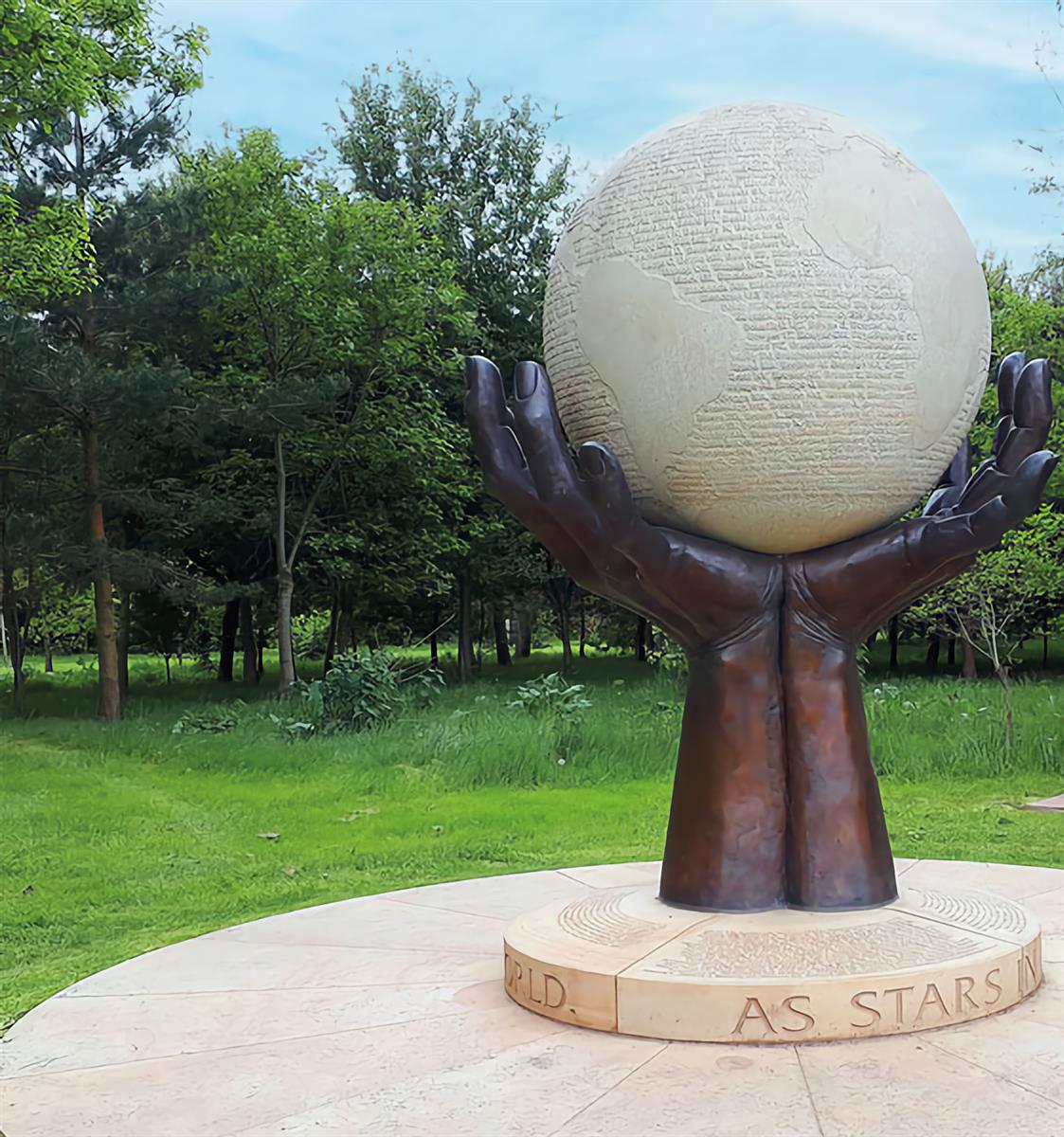 In the First and Second World War the Voluntary Aid Detachment was comprised of civilian nurses, who worked alongside military medical staff at home and overseas. By the summer of 1914 nearly 50,000 women had signed up to volunteer, some even losing their lives while bravely providing medical attention to the war-wounded. The Voluntary Aid Detachment was finally disbanded in 1960, but volunteers for organisations such as the Red Cross and St John Ambulance continue to provide medical support where it is needed most today. 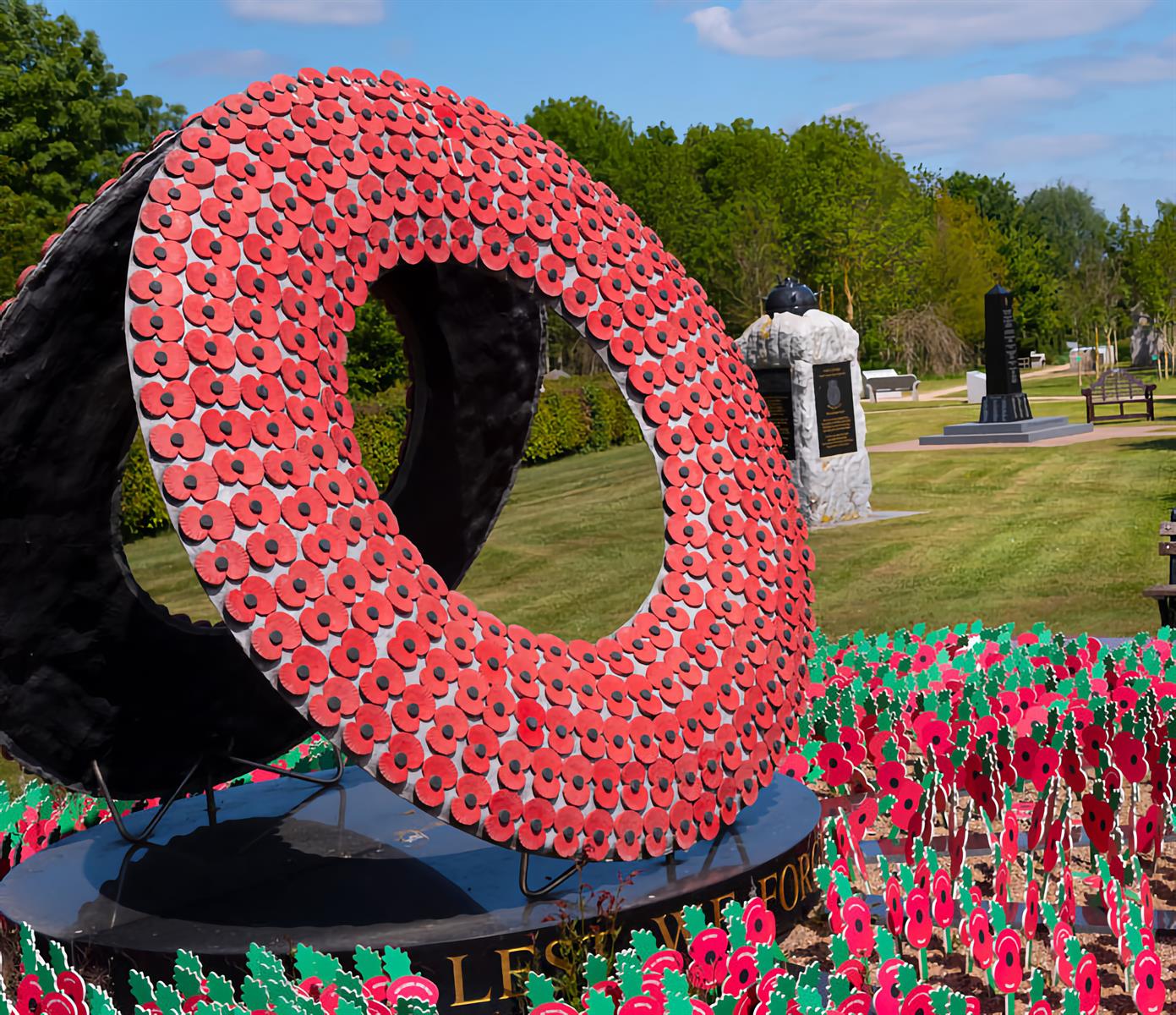 As the champions of Remembrance, the Royal British Legion works with the Arboretum to engage people in learning and Remembrance of those who have served our Nation. More than 110,000 volunteers aid the Legion in their mission, raising millions of pounds during the annual Poppy Appeal and helping to provide assistance such as rehabilitation and mental health support to veterans and their families.